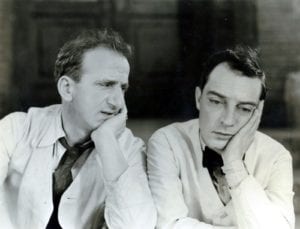 Buster Keaton is currently the most popular comedian of the silent era.  But in the late 20s, he was giving anxiety to his producer, Joseph M. Schenck.

Schenck decided that since his releases for United Artists were not as successful as he had hoped, he would pass him over to Metro-Goldwyn-Mayer, owned by his brother Nicholas.  Here he could be sure his comedies would have stronger support, both in production and release.  And so it turned out – to begin with.

Despite his string of brilliant comedies, MGM insisted that he worked from a script, something he had not done before, Buster dutifully made The Cameraman just as MGM wanted.  It was a tremendous success.  Spite Marriage was another.  But thereafter, problems assailed him.  Sound became a fact of life.  Coming from vaudeville, Keaton had no fear of talk, but MGM did not yet know how to handle it.   The front office arranged his subjects, and the writers to work on them, and Buster was less and less involved.  Gone was his free and easy picture-making style when he could make it up as he went along, stop if he got stuck and play baseball, spend as much as the project required.

He was given a supervisor.  At least one MGM director had left after having that indignity forced upon him.  And it wasn’t as if the supervisor knew anything about Keaton’s style of comedy.  Lawrence Weingarten specialised in sophisticated, light comedy.  The company kept borrowing the co-workers he depended upon and not giving them back.  On top of which Buster was experiencing marital trouble, was being denied access to his sons, and was drinking heavily.

During Prohibition drink swept through Hollywood like a tidal wave.  Keaton was one of those alcoholics who only needed a couple of drinks to make him incapable.  His state is all too apparent in some of his later MGM pictures, where this once athletic actor had to play sitting down.  He also gambled for high stakes – often with the very producers who were crippling his career.  Of course, it was all done with his best interests at heart.  Having made one film he didn’t care for, he was obliged to repeat it three or four times for foreign versions.  In an attempt to increase his popularity, he was given a partner – the silent Buster was teamed up with the garrulous Jimmy ‘Schnozzle’ Durante.  But his popularity didn’t need increasing – even his bad films were huge box office successes, something which him all the more depressed.

He moved out of his bungalow into a land yacht which, parked on the backlot, became notorious for wild parties.  Finally, Louis B Mayer confronted Keaton and ordered him off the lot.  ‘You studio people warp my character’ said Buster.

Keaton eventually returned, on a far lower salary, as a gag-writer, helping to create some of the funniest sequences in film history.

So Funny It Hurt is the story of Keaton’s years at MGM.  It includes rare footage, such as a home-movie shot in New York in 1928 of The Cameraman in production, and it is presented from the old MGM studios by the actor James Karen, a close friend of Buster’s from the 1950s.

Kevin Brownlow will be in discussion with David Robinson.