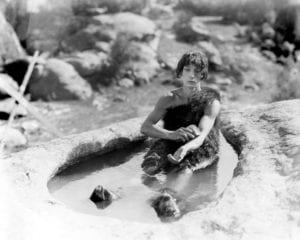 Three Ages is the first feature-length film that Buster Keaton wrote, directed, produced and starred. The film contains three different stories set in three different time periods of human history: the Stone Age, ancient Rome, and modern times (the Jazz Age). The film was shot in this manner as a kind of insurance for the studio. If it failed, the film could easily be broken up into individual shorts.  The film also works as a satire of D. W. Griffith’s Intolerance (1916), which was a film that told four different stories over the span of 2,500 years. Three Ages was made in 1923, and starred Buster Keaton, Margaret Leahy, and Wallace Beery.

The three time periods that are depicted in the film have characters portrayed by the same actors. In the Stone Age, Keaton is a caveman who competes in a show of strength with another bigger, brawnier caveman (Wallace Beery) for the attentions of a cavewoman (Margaret Beery). In Ancient Rome, Keaton is shown in a rivalry to gain the affections of a Roman noblewoman. Keaton participates in a chariot race and is thrown into a lion’s den. In the modern age (Jazz Age), Leahy is to marry another man, but Keaton discovers that he has been charged with forgery and bigamy.

Three Ages was the first feature-length film where Keaton wore so many hats, but Buster Keaton’s first starring role in a feature-length film was in The Saphead (1920). He was recommended for the role in The Saphead by Douglas Fairbanks. Fairbanks had played the role onstage but had other commitments and, as the film was to have a more comedic slant, put Keaton’s name forward for the role.

This was the only film that Margaret Leahy made. She was discovered in a beauty pageant in England that was seeking new film stars. The stars were then flown out to Hollywood to make a film. Her first attempt was not a success and she was dropped from the film. She ended up making Three Ages, but never acted again after this film. Instead of moving back to England, Leahy chose to remain in California.

Wallace Beery was at one point the world’s highest paid actor. He started out in silent films at the Essanay Studios portraying a Swedish maid in drag named Sweedie. Beery made several of these films including one with his wife, Gloria Swanson. His most notable silent films include: The Lost World (1925), Robin Hood (with Douglas Fairbanks – 1922), The Last of the Mohicans (1920), and Beggars of Life (with Louise Brooks – 1928). He was fired from the studio with the advent of sound, but was contracted by Irving Thalberg to MGM as a character actor. Beery was nominated twice for the Best Actor Academy Award, winning one of them.