The 16th edition of Bristol’s own Slapstick Festival celebrates comedy in all its aspects – the never-surpassed classic silent film comedy, the great era of classic comedy on television, and live visual performance.

Rediscovered silent comedy classics will be seen at Watershed and Bristol Cathedral on 23rd and 24th January, in part chosen by our guest curator: Serge Bromberg, founder-director of Lobster films, and one of the world’s great saviours and restorers of “lost” historic films. 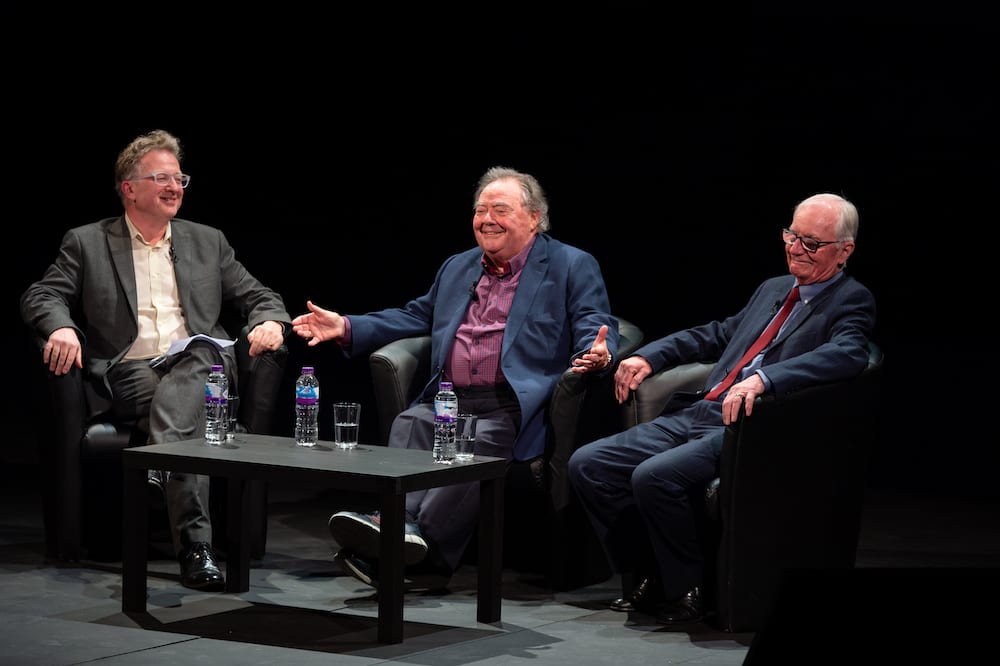 Here is a selection of photos from the 15th edition of Slapstick Festival taken by our regular photographers, Paul Lippiatt and David Betteridge. Check out more work by Paul and David at their websites, which can be found here (for Paul) and here (for David).

More photos from Slapstick 2019 can be found on our social media channels. We are on Facebook as SlapstickFestival, and on both Twitter and Instagram as @SlapstickFest.

Judging by audience feedback we’d say that his year’s highlights included our first ever trip to Bristol Cathedral, the centrepiece of which was Harold Lloyd’s classic feature For Heaven’s Sake (1928), the screening of Buster Keaton‘s Battling Buster (1926) at Watershed and Little & Large‘s emotional reunion at Bristol Old Vic. Oh, and let’s not forget The Goodies who, year in year out, return to Slapstick to huge acclaim!

Don’t forget also that Slapstick Festival returns this year for one day only next month! We’ll be at The Hippodrome on 10th Feb for two shows, a matinee show specially created for the younger audience with popular children’s TV presenter Andy Day and our near legendary silent comedy gala in the evening, hosted by Marcus Brigstocke and featuring Charlie Chaplin‘s Modern Times (1936) accompanied live by a 40-piece orchestra!

Some more photos, all © David Betteridge…

To an increasingly crazy world, comedy brings solace and sanity and Bristol’s SLAPSTICK now stands as Europe’s biggest and best festival of comedy, bringing together classic screen clowning with today’s fnest living laughter-makers from British stage and television. This year is the 14th and our biggest edition yet.

This edition of Slapstick festival is dedicated to our dear friend Tony White (1937-2017). His devotion, enthusiasm and contribution to Slapstick was always a highlight each year for us and he will be sorely missed by us all.

Comedy is timeless and this year’s SLAPSTICK celebrates the centenary of Buster Keaton’s debut in pictures: a hundred years later he stands with Chaplin – an icon, more funny and relevant than ever. More than half a century ago British television saw an explosion of comedy genius – from Monty Python to Dad’s Army, from Peter Sellers to Eric & Ernie – that still leaves its indelible mark on the best new laughter-makers today. At SLAPSTICK, today’s comedy creators merrily and passionately confront their comic ancestry for new audiences.

Several events – notably our opening night screening of SPITE MARRIAGE – recall the making and mastery of Buster Keaton. Oscar-winning historian, restorer and flm-maker Kevin Brownlow presents some Keaton surprises, while historian David Robinson reveals the vaudeville world that produced the young Keaton. Bristol will also have an early opportunity to see James Dangerfeld’s “one-man musical”, When You Fall Down, in tribute to Keaton’s life and work. A premiere programme of flms rediscovered after disappearing for more than a century – most from the collection of Anthony Saffrey, who will be present for the event – shows the evolution of the comic star: from Andre Deed and Max Linder to lesser-known geniuses like Marcel Perez and Karl Valentin. In addition Chris Serle introduces us to the unjustly long-forgotten Austrian clowns, Cocl and Seff.

A special feature of this year’s SLAPSTICK is the role that music has played in comedy. A celebratory late-night screening of The Rocky Horror Picture Show with special guest Jason Donovan. The musical theme continues with a series of programmes fronted by the patron saint of SLAPSTICK, Barry Cryer, whose unparalleled contribution to British comedy writing includes The Two Ronnies. Barry’s frequent partner in comedy crime, Ronnie Golden appears in a solo show and veteran Goodie and wildlife champion Bill Oddie will reveal the secrets of song writing for The Goodies. There is a rare reunion of the mock heavy-metal band “Bad News,” from The Comic Strip Presents, with Adrian Edmondson and Nigel Planer in an onstage discussion. “Raw Sex”, the comedy musical double act with Rowland Rivron and Simon Grint, also features as Rowland discusses their rise from French & Saunders house band to cult comedy legends today.

Slapstick is proud, as ever, to present world class live music accompaniments for its projected silent film screenings from solo piano improvisations to full orchestral scores and this year is no exception. At our gala, Charles Chaplin’s A Dog’s Life (1918) is being accompanied by the 16-piece Bristol Ensemble performing with Chaplin’s own score conducted by Slapstick’s Musical Director, maestro Günter A. Buchwald. The unstoppable four-piece ensemble European Silent Screen Virtuosi (ESSV) return with special guest musicians including Oscar©-winner Richard Williams on cornet and Roger Huckle (Bristol Ensemble) to accompany Keaton’s Sherlock Jr They will also provide accompaniment for Battle of the Century (1927) on Saturday night and Spite Marriage (1929) on Thursday evening.

In addition multi-instrumentalist Stephen Horne will be accompanying classic Keaton shorts at Bristol Old Vic on Saturday afternoon and we are delighted to welcome back the world’s foremost silent film harpist Elizabeth-Jane Baldry who’ll be accompanying short comedies for us on solo harp on Saturday. Pianist and composer Daan van den Hurk  returns to Slapstick Festival on piano and other solo performers include John Sweeney and Günter A. Buchwald.[

A brand new event for which we anticipate a big future is “Young Slapstick Saturday ” at Colston Hall which combines screenings of classic comedy short flms with a comedy workshop for 8-11 year olds and Punch-and-Judy shows in between. Slapstick offers fun and laughter for all the family and all the South West. There could be no better way to start the year 2018!

There could be no better way to start the year 2018!

Here are a selection of photos from the 14th edition of Slapstick Festival which we reproduce here with thanks to our brilliant team of photographers, Paul Lippiatt, David Betteridge and Dave Nelson. Check out more of their work on their websites, which can be found here (for Paul), here (for David) and here (for Dave).

More photos are already on our social media channels and we’ll no doubt be adding even more over the coming days so please keep a lookout for them. We are on Facebook as SlapstickFestival, and on both Twitter and Instagram as @SlapstickFest. 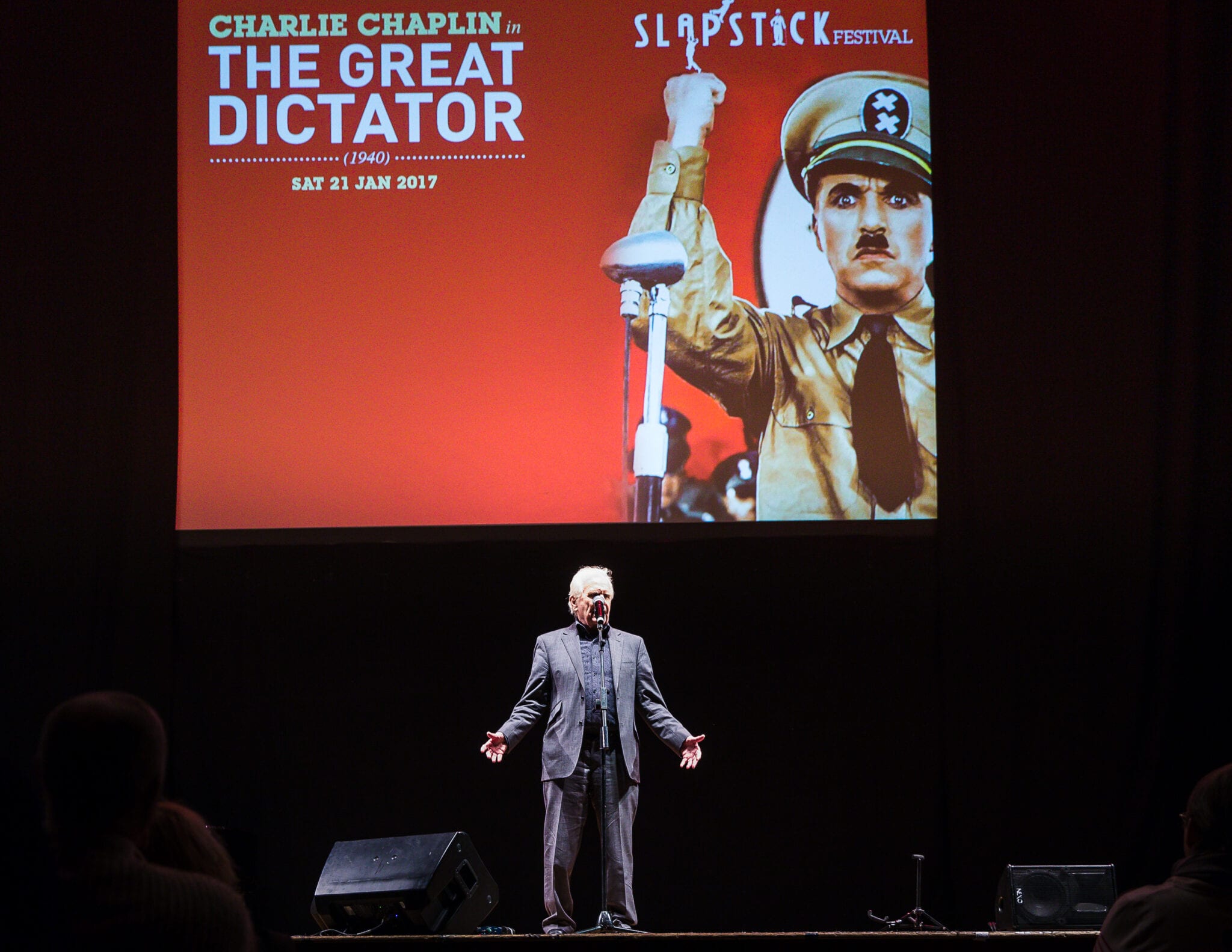 Slapstick 2017 (18-22 January) was our biggest ever festival with more events staged – and more guests attending – than at any previous edition. By all accounts, it was also our most successful festival ever – something our festival director, Chris Daniels, reflected on in a post you can read in full here, which also touches on the future direction of the festival.

Elsewhere on the site, you can find a selection of photos from Slapstick 2017 by our team of photographers, plus a ‘tribute’ to Donald Trump by Ronnie  Golden and Neil Innes (other video highlights from the festival can be found on our YouTube channel). Finally, if you want a trip down memory lane we’ve listed a few reviews of the festival by various media bodies on a blog which can be found here.

Meanwhile, our thoughts are slowly turning towards Slapstick 2018 which we’ll endeavour to, once again, make our best Slapstick ever! 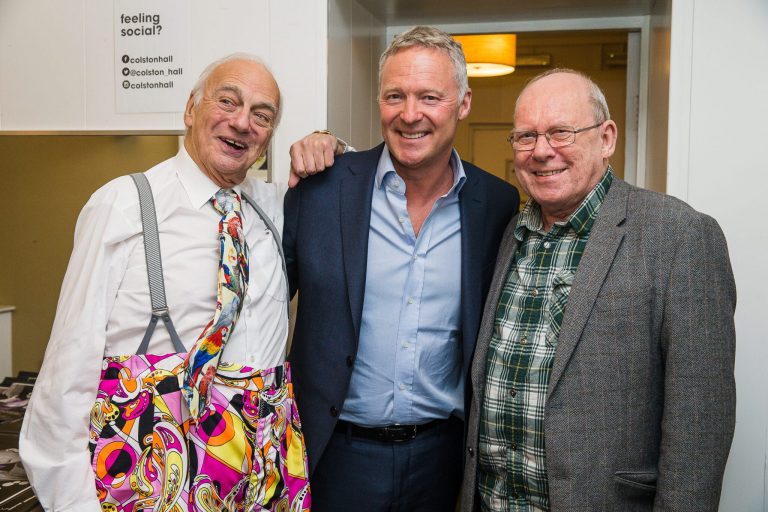 N PHOTOS: SLAPSTICK 2017 In Photos: Slapstick 2017 Above are a series of photos taken during Slapstick 2017, which ran between 25th – 29th January 2017. All events took place either at Colston Hall, Watershed, Bristol Old Vic or Arnolfini. All images were taken by one of our official festival photographers; Paul Lippiatt, David Betteridge and David […]

Day 5 of Slapstick 2017 – A Quick Recap of Yesterday It’s the morning of the last day of the festival! Yesterday was jam-packed with exciting events at the Watershed and Colston Hall. The day started with Chris Serle presenting a Fairbanks and Chaplin double bill. This was followed by a conversation with Roy Hudd […] 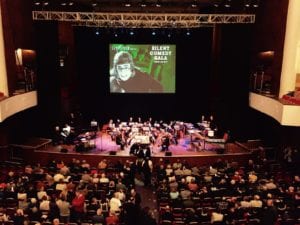 Day Four at Slapstick Festival 2017 – Reliving the Gala Last night was our annual Silent Comedy Gala hosted by the wonderful impressionist, Rory Bremner. Topical as always, his Donald Trump was spot-on! He soon had the audience chuckling with his very funny political satire (extremely appropriate considering the timing of the gala with the […] 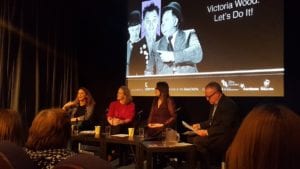 Slapstick Festival 2017 – 2 Days In! It’s Day Two here at the Slapstick Festival – and we are in full swing! We’ve got our welcome desk set up at the Watershed. If you are coming to one of the events, come and say hello. We’ve also got some great t-shirts, badges, magnets, and posters […] 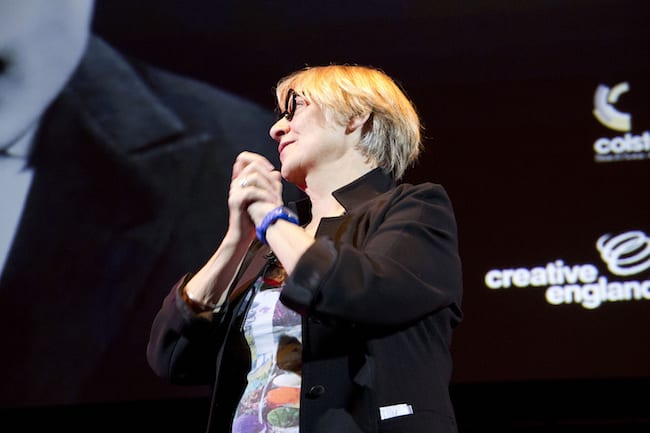 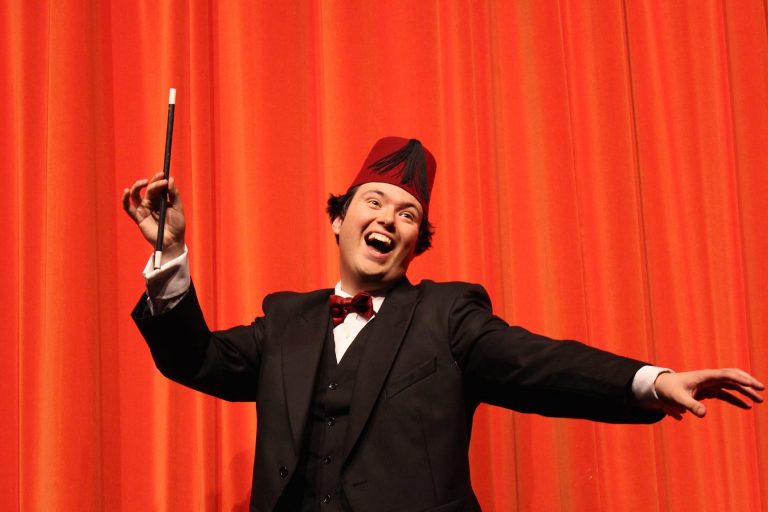 Sun 22 Jan 2017 Accidentally Preserved: Surviving Slapstick on 16mm Watershed | 9.30am | Tickets: £8.00/£6.00 Slapstick comedy shorts were excellent fodder for home movie companies of the 1920s and 1930s. Kodascope and Pathéscope rented or sold safety film prints for people to watch in their homes, not realising that decades later they would out-survive the […] 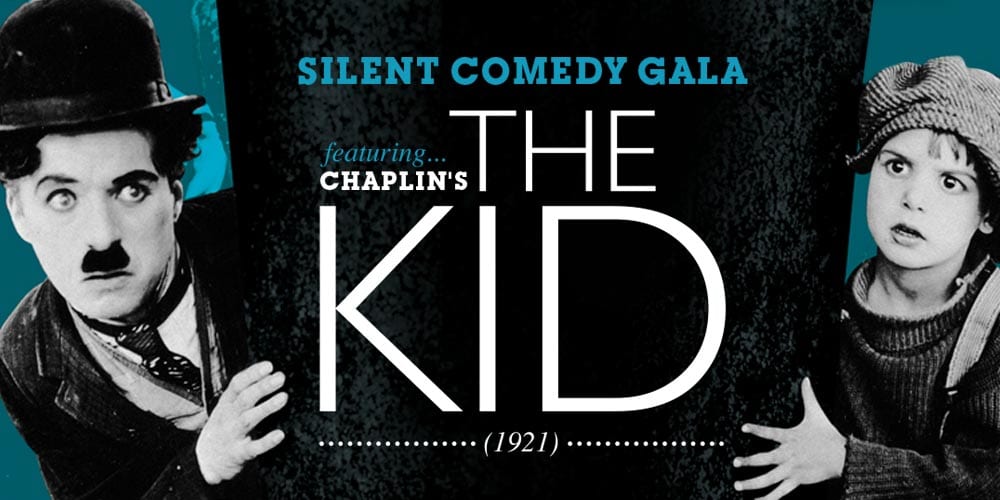 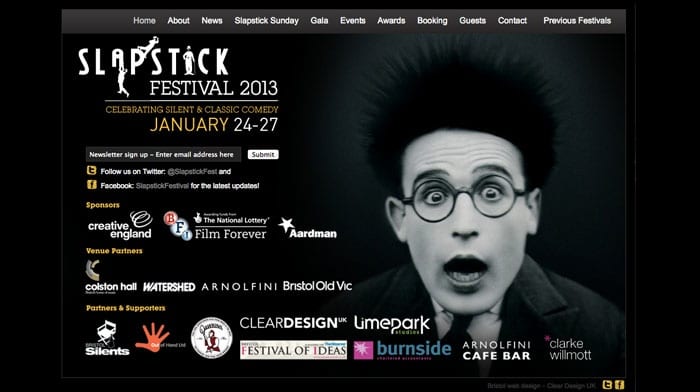 In Photos: When Victoria Wood Hosted The 2013 Slapstick Festival Gala

Back in 2012 we were thrilled and excited when the one and only Victoria Wood agreed to host our 2013 gala. As expected she hit the ball out of the park, taking on the roll with aplomb, insight, laughs galore and, of course, professionalim. Below are a selection of photos from that evening. 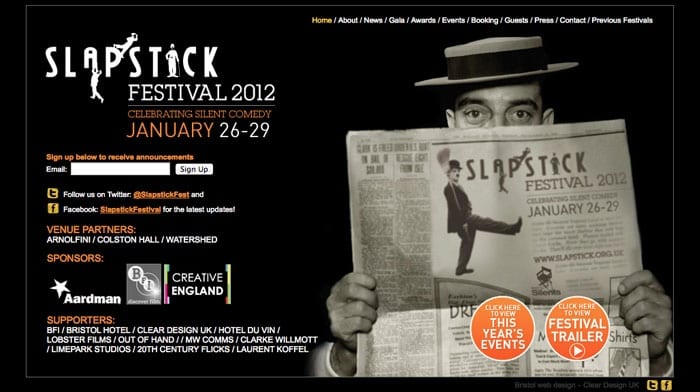 Bristol’s Slapstick Festival returns for an eighth incredible year, bringing laughter and hilarity to Bristol in the dark, early days of the New Year… just when we need it the most!

Slapstick Festival is returning to Bristol and it’s bigger and better than ever with seventeen unique events forming our most exciting and diverse programme yet. We are welcoming some very special guests to the festival for the first time including writer, performer and television personality Griff Rhys Jones who is hosting our annual Gala at Colston Hall and Monty Python’s Terry Jones, who, along with Sanjeev Bhaskar and ‘Seventh Python’ Neil Innes will present a special screening of Monty Python’s ‘Life Of Brian’ (1979) at Colston Hall on Saturday night. Other highlights include our opening Thursday evening show at Colston Hall with Ian Lavender (Private Pike) as he reveals the inner workings of Dad’s Army from the inside out. Plus, many of our much-loved festival patrons will be returning to share their passion as we celebrate some of the finest and funniest moments in silent and visual comedy.

This year we are championing that great master of the stone face expression and extraordinary comic performer Buster Keaton in a series of special events at different venues that highlight a selection of his finest – and funniest – work. A specially commissioned score will premiere at our gala event at Colston Hall, which will add a new, magical dimension to Keaton’s bonefide masterpiece ‘The General’ (1926).

We are delighted to announce Pierre Etaix that great french ‘silent’ comic whose finest work from the sixties is appropriately experiencing somewht of a renaissance at film festivals across the world at the moment is coming to the UK in person to be the fourth recipient of our annual Aardman/Slapstick Award for ‘Excellence in Visual Comedy’ and to attend two special events we are presenting in collaboration with Bristol’s Festival of Ideas.

So , we consider this our finest programme yet, the perfect antidote to escape the short days and bad news and have a laugh at Slapstick! 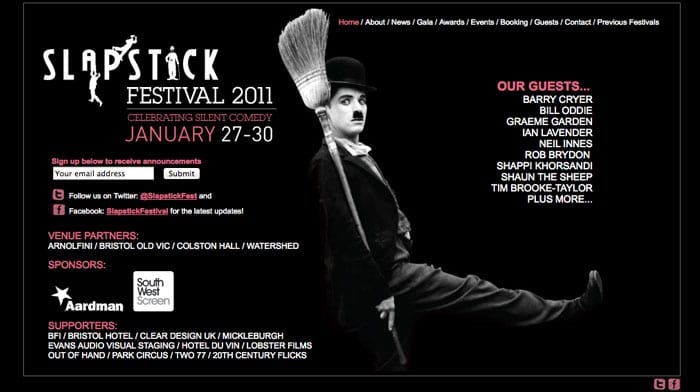