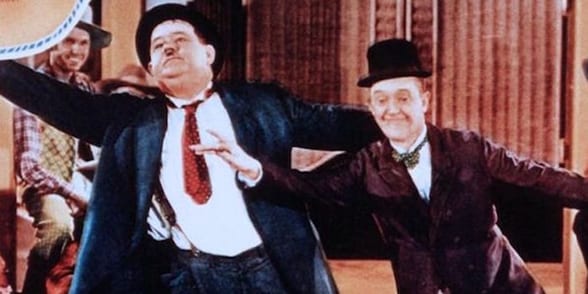 Like most Slapstick comedy, best laid plans do sometimes go awry. Due to unforeseen circumstances relating to rights clearances, please note that we are now unable to screen Way out West. Instead, we are delighted to present a couple of rib-tickling Stan & Ollie shorts hand picked and introduced by Laurel and Hardy admirer Goodie Bill Oddie. We apologise for any disappointment or inconvenience caused and hope you enjoy the event and festival.

After being jilted by his sweetheart Jeanie Weenie, Ollie decides that he and Stan should join the French foreign legion to help forget. Things don’t quite go as planned under the scorching desert sun and the harsh discipline of the Commandant.

The last fully silent film starring Stan and Oli, Angora Love finds the inept duo followed to their lodgings by a runaway goat. The noise and aroma gets the attention of their suspicious landlord and attempts to bathe their new hairy friend only makes things worse. With Stephen Horne on piano.