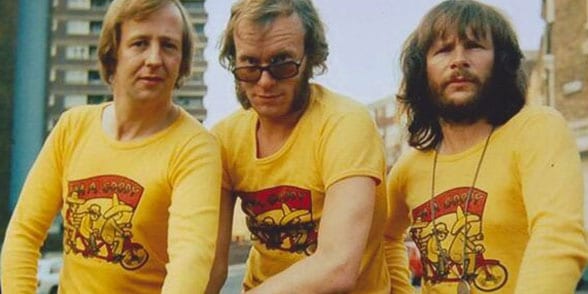 Those of you who are old enough, cast your minds back to the evening of the 8th of November 1970. What were you doing that night? Were you perhaps huddled round a (probably) black and white television screen eagerly anticipating the first episode of what was to become a hugely popular and groundbreaking comedy series called The Goodies? We like to think probably so!

The Goodies was ultimately so successful it ran to nine magnificent series, clocking up an impressive 77 episodes of anarchic, hilarious, innovative, disruptive, occasionally quite puzzling and always brilliant comedy in the process.

And on the occasion of the year of the 50th anniversary of The Goodies we’ve decided it’s time for you, fans of Slapstick and The Goodies, to definitively help us decide which is the greatest episode of all time!

To make this happy chore a little easier for you we’ve gone through all 77 episodes (a thankless task but someone had to do it!) with the help of The Goodies themselves and a few of our celebrity friends and have narrowed all the episodes down to what we think are the best ten.

When the results of our poll are in, the episode earning the most votes will be screened at Slapstick’s 50th Anniversary of The Goodies event in Bristol on January 25th, in the company of the dashing trio themselves; Tim Brooke-Taylor, Graeme Garden, and Bill Oddie.

“Sounds like a great idea, how do we vote?” you ask?

Well, it couldn’t be easier. All you need do is click this link and head to our official poll form. You then just scroll down the list of episodes, click on the one you feel deserves to be chosen as “The Greatest Goodies Episode Of All Time”, carry on down to the foot of the page and click “submit”. It’s as easy as that!