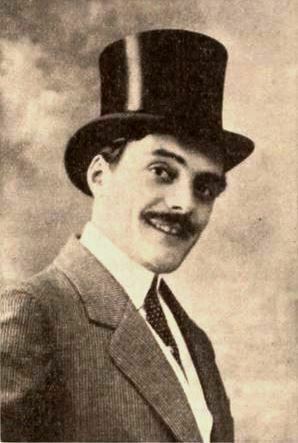 One of my favourite events from the festival was the screening of Max Linder’s Seven Years Bad Luck. David Robinson’s excellent introduction gave some insight into what had been a very troubled life for the early silent film star. If you weren’t at the event, I thought I would share some more information about Linder.

Max Linder was the stage name of Gabriel-Maximilien Leuvielle. Linder originally started out on stage in the French theatre, and in 1905 had his film debut. In 1911, he also began directing his own films. Amazingly, since he has been largely forgotten, he was the highest paid star in the world in 1912!

Linder was very meticulous about his films, and often had notes about what types of music should be played with certain scenes. One of the great things about the screening of Seven Years Bad Luck is that there is a scene where Linder is playing the piano quite raucously. Accompanist Daan van den Hurk found the song that Linder was playing and used this in his piano score to the film!

The outbreak of World War I brought trouble to Linder’s life. He was seriously wounded during the war, and this experience also led to bouts of depression. After the war, Linder was invited to the US to make films. During the early 1920s, he made films for United Artists. I found a great clip on YouTube of Max Linder meeting Charlie Chaplin in 1917.

Unfortunately, depression caused Linder to kill himself in a suicide pact with his wife in 1925. Charlie Chaplin is said to have closed his studio for a day out of respect.

Max Linder made around five hundred films, but sadly most of these are lost! His daughter, Maud Linder, was largely responsible for re-introducing the world to this lost genius. She made a documentary about her father and re-issued some of his shorts.

One of the interesting facts that I found about a modern reference to Linder is in Quentin Tarantino’s Inglorious Basterds. A cinema in the film is having a Max Linder festival, and characters discuss Linder and Charlie Chaplin.

Here is one of Max Linder’s shorts:

https://www.youtube.com/embed/bmeeBXfw1cg
Information came from IMDB, Wikipedia, The New Yorker, and The Huffington Post.