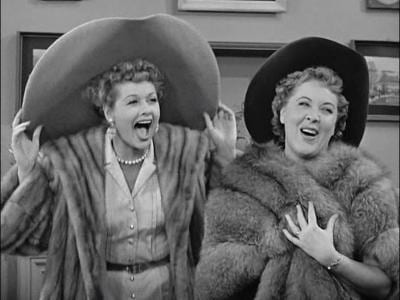 Lucille Ball and Vivian Vance created one of television’s most enduring comic duos – Lucy and Ethel. Lucy and Ethel were neighbours and best friends on the beloved sitcom, I Love Lucy. The two were constantly getting into trouble with all of Lucy’s crazy schemes! I remember growing up watching these two in reruns and never failing to laugh at their antics! One of the most famous scenes involves the duo working in a chocolate factory and trying to keep up with the production line. The comic gem is below.

One of the surprises that I discovered when I was trying to do some research about Lucy and Ethel is the amount of references to these two characters in everyday life! So many articles came up about friends who describe themselves as Lucy and Ethel… or a situation that Lucy and Ethel would have gotten themselves into. I love this facet of popular culture… that something can endure and transcend its original medium. Two people can call themselves the “Lucy and Ethel” of their town and the meaning behind this is immediate, even if you aren’t fully aware of the source behind these names. I think I could even describe one of my own friendships as though the two of us were Lucy and Ethel!

There is so much written about I Love Lucy, and it has a fascinating spot in television history. The show had so much impact on American culture. I just wanted to write a little bit more about Lucy and Ethel. Apparently, Lucille Ball was quite lukewarm to the casting of Vivian Vance as Ethel. Ball had originally envisaged a much older woman in the role. Vance was made to wear frumpier clothes and was made to look older than she was. Ethel was married to Fred Mertz. Fred was portrayed by William Frawley who was 22 years older than Vivian Vance. It was rumoured that Ball and Vance did not get along during the filming of I Love Lucy. Fortunately, this rumour was false. Lucille Ball eventually warmed to the presence of Vivian Vance and her professionalism, and this led to them becoming close friends.

I Love Lucy is over 60 years old, but still holds a fond place in many hearts. Yes, some parts of it have aged… but it is still worth revisiting! Watching an episode almost always guarantees a smile and some laughter. Much of this laughter comes from the enduring friendship and antics of Lucy and Ethel.