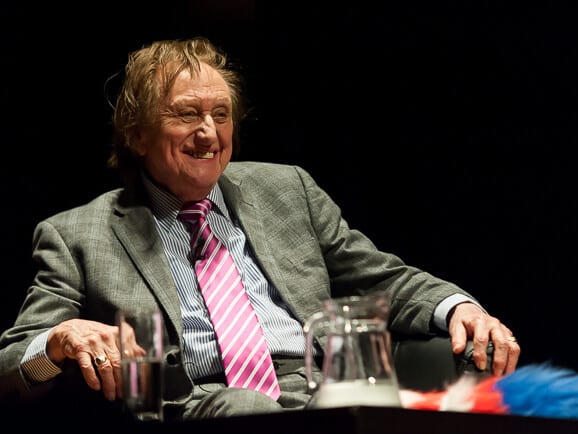 In 2016 Slapstick Festival welcomed Sir Ken Dodd to Bristol where he became the fourth recipient of the Aardman Slapstick Comedy Legend Award.

Never one to do interviews in this way, this truly was a coup for Slapstick.

In conversation with writer and broadcaster Dr Matthew Sweet, Ken was in scintillating form on the night.

We hope you enjoy the tenth release in our Laughter in Lockdown series.

*This film is the unedited version of the whole event. The clips have all been left in – even though they are not visible – for reference only. This episode will be replaced with a shorter, edited version in July.

In 2018 Jo Brand made her debut at Slapstick Festival where she delighted and entertained a sold-out audience with a selection of her top comedy picks.

Jo had been someone we’d wanted to bring to Slapstick for some time, so when the undisputed comedy icon agreed to join us at Bristol Old Vic we couldn’t have been happier.

So settle back and enjoy Jo Brand in conversation with Robin Ince as she tells us about what makes her laugh, who her comedy  online australia heroes are and why (shock, horror) she isn’t a huge fan of slapstick comedy!

Back in January 2018 stand up comedian and writer Lee Mack joined us at Colston Hall to present his “Laurel and Hardy Classics” – a unique evening of hilarious extracts, comedy, music and film devoted to the greatest comedy double act of all time.

The star of long-running BBC sitcom ‘Not Going Out’ and ‘Would I Lie to You?’ team captain had chosen a selection of his favourite Laurel & Hardy clips and shorts for a packed Colston Hall audience.

One of the many highlights of the night was a complete screening of the boys’  classic silent comedy, Liberty (1929), which also featured the world premiere of a new semi-improvised score from composer Guenter A. Buchwald performed live by the European Silent Screen Virtuosi, who also included Romano Todesco, Frank Bockius and Marc Roos.

Just over a year ago, in January 2019, stand up legend and master of the one-liner Tim Vine joined fellow comedian Richard Herring on stage at Bristol Old Vic to talk about some of his favourite comedy shows and films.

The show crackled along as these two masters of quick wit and tight timing teamed up for an illuminating trip down memory lane. It also got quite poignant at times as Tim reflected on his late Dad’s influence on his comedy – and he even selected a clip of his Dad joining him on stage to tell a joke as one of his favourite comedy moments.

Laughter In Lockdown #6 – Remembering the comedy genius of Victoria Wood

Laughter In Lockdown #6 – Remembering the comedy genius of Victoria Wood

As a regular guest at the festival (which included her triumphantly hosting our 2013 gala), we knew we had to celebrate her life at the following year’s festival.

So, in collaboration with Bristol Festival of Ideas and The University of Bristol, we convened a panel which included stand-up comedians Pippa Evans and Lucy Porter, along with comedy and theatre historian Louise Wingrove, to discuss her extraordinary legacy and influence. Needless to say, the show sold out in double-quick time.

The event was hosted by Andrew Kelly and is the latest Laughter In Lockdown release.

Back in January, The Goodies gathered together on a Slapstick stage for what ultimately proved to be the last time as a trio, to celebrate the 50th anniversary of their groundbreaking TV series.

Hosted by Robin Ince, the show featured a discussion on the extraordinary legacy of their award-winning TV series (1970-82) as well as a countdown of the public’s favourite episodes from the show – as decided upon by an online poll run by the festival in the lead up to the event. This winning episode (no spoilers please if you were at the show!) was screened in full at the end of the evening.

As most of you will now know, we recently learned of the sad passing of Tim Brooke-Taylor OBE. Tim was on great form on the evening of this event, exuding his usual enthusiasm, passion, charm, energy and wit. We hope you’ll agree it serves as a fitting tribute to an undisputed comedy legend.

We’re up to week four of our laughter in lockdown series and this week we’re travelling back to 2014 for award-winning comedian Harry Hill’s Top Comedy Picks.

An annual sell-out event, the format of this show features a well-known comedian choosing clips from some of their favourite on-screen TV shows or films.

For this event, Harry was on stage with I’m Sorry I Haven’t A Clue star and Goodie, Graeme Garden.

A rare buy liquid antibiotics insight into the comic influences of the master of surrealist humour Harry Hill!

Our third exclusive Laughter in Lockdown stream is the closing event of Slapstick 2020 – ‘I’m Sorry I’ll Read That Again… Again!’ A show with added poignancy as it featured the final Slapstick performance from our dear friend Tim Brooke-Taylor.

‘I’m Sorry I’ll Read That Again’ was the very funny and deliciously anarchic radio comedy sketch show from the BBC that was the precursor to ‘The Goodies’, ‘Monty Python’s Flying Circus’ and ‘I’m Sorry I Haven’t A Clue’. It ran from the early 1960s to the early 1970s with the regular Wonder Team of Tim Brooke-Taylor, John Cleese, David Hatch, Jo Kendall and Bill Oddie (with music by Dave Lee and The Boys), including a special anniversary reunion in 1989.

Headlined by none other than comedy icon, writer, actor and Python John Cleese, the evening also featured a set by Rory Bremner, who had lots of material to play with bearing in mind Autumn 2016 was just months before Donald Trump was elected president of the US.  As such, this event not only provides lots of laughs but also a fascinating snapshot of an important period in history seen through the eyes of one of the world’s leading impressionists.

The wonderful Monty Python collaborator Neil Innes, who is mainly known for his work in the Rutles and the Bonzo Dog Doo-Dah Band, opened the show with some quintessentially and intrinsically witty songs. The “music and comedy” theme was further enhanced with a set by the inimitable Ronnie Golden and Aardman Slapstick Comedy Legend and ‘I’m Sorry I Haven’t A Clue’ star Barry Cryer, who also might just have slipped a parrot joke or two into the proceedings buy inderal tablets (spoiler: he totally did).

Compering the evening was that king of the one-liners Tim Vine, brilliantly providing the glue that held all the other sets together.

In their review of the evening Bristol 24/7 wrote:

“All the performers are such national treasures that there was a very British family feel and innocence to the show that modern comedy somehow doesn’t evoke.”

We hope you enjoy this rare chance to watch a once in a life time line up.

N.B. These recordings were made for archive purposes and as such are not recorded in ‘broadcast quality’. Where the odd word is hard to hear or the artist can’t be seen as they’re side stage, please remember that these films were never meant to be seen in public and this is a rare chance to glimpse these films thanks to the generosity of the artists involved allowing us to view them. Enjoy!

We’re releasing one video a week for the duration of lockdown – or for as long as we have events available. They will be going live on YouTube first so please subscribe to our channel over there via the button below.

In recognition of the unique circumstances we find ourselves in at the moment with the ongoing C-19 pandemic, Slapstick have taken the decision to try to make a small difference in the only way we know how – by bringing some laughter into your lives. To this end, from Thursday this week we’ll be sharing previously unreleased footage captured during a selection of the unique events we’ve staged over the past decade featuring, one show every week.

The LAUGHTER IN LOCKDOWN roll-out will start at 10am on Thursday 9 April with film from what is believed to be the last on-stage ‘in conversation’ by Eric Sykes CBE, a comedy writer and radio, film, TV and stage performer who worked with a Who’s Who of stars during his 50 years plus career.

In it, Eric Sykes is interviewed by Slapstick board member, I’m Sorry I Haven’t A Clue panellist and one third of The Goodies, Graeme Garden who recalls:

“Eric Sykes was a comedy hero to me. He ploughed an idiosyncratic furrow between mainline comedy and the anarchy of his chums in the Goon Show. For much of his career he was profoundly deaf and relied on a hearing aid mounted in the frames of the heavy spectacles he wore. Later his vision failed as well, but that didn’t seem to blunt his enthusiasm or his energy. What I admired, apart from his distinctive delivery and physical https://cheapnolvadexpct.com/generic-nolvadex/ funniness, was his inventiveness and sense of mischief. And the mischief was still very much in evidence when I had the pleasure and honour of interviewing him in 2009.”

Other shows we have lined up for sharing include Harry Hill talking about his favourite comedy moments; highlights from when Sir Ken Dodd and French & Saunders received their Aardman/Slapstick Comedy Legend awards; a stand-up comedy set from John Cleese and the first stage reunion in decades of Little & Large, the double act best described as the Ant & Dec of their day and whose reminiscences now seem even more bittersweet following the death this month of Eddie Large (Hugh McGinnis).

“Like so many organisations, we’ve had to cancel a number of planned events because of Covid-19 risks, including some vital fund-raisers. But we have an archive full of funny and fascinating events staged at past festivals – all of them unique, never-to-be-repeated, one-offs shot as they happened. We’ve never released any of them before but now seems a good time to do it. Hopefully, it will give viewers some much-needed laughter in lockdown and remind them that Slapstick will be back with yet more special events just as soon as it is possible.”

Details of the first event will appear on our home page on Thursday. They will be going live on YouTube at the same time so please subscribe to our channel over there.