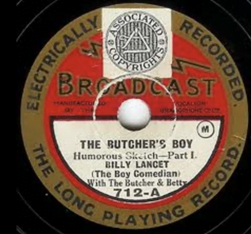 Someone recently posted on You-tube a recording from an old 8” low-cost shellac gramophone disc released in 1930.

It was entitled “The Butcher Boy” and was labeled as being performed by “Billy Lancet, The Boy Comedian”. It was indeed the voice of a very cheeky boy, and a very lively performer.

So who was Billy Lancet? There was some speculation on-line when the disc appeared , and vague recollections of an artist of some such name. but then he returned to obscurity.

Since I match the disc in age, I was curious enough to turn to the archives. The startling discovery was that for a few years, between 1928 and 1933, the now forgotten Billy Lancet was a super-star of British vaudeville, touring with his own company, topping the bill In the major British variety theatres. A typical review of the time informs us:

The chief attraction is Billy Lancet who appears in a sketch “Willie’s Birthday”. with Thelma Rayne and Cameron McKinley. One would not like to guess the age of Mr Lancet. He has the appearance and mannerisms of a boy of ten, but his work suggests many years of experience as a comedian. It is a most laughable sketch. The diminutive comedian has an irresistible personality and gets a grip on the audience before he has been on the stage many seconds. There is no story in the sketch. It is merely an incident in the life of a precocious young lad who knows his mother will always take his side against his stepfather, and his antics are decidedly amusing. Mr Lancet would hold the stage for twice the length of time allotted to him, and he is to be commended on a clean and entertaining act.

The Bad Boy of Variety

Willie’s Birthday was succeeded by other titles – Willie Lends a Hand, Leave it to Willie, Willie’s Good Deed, but clearly the sketches were constantly changing and updating, so that audiences could see them again and again and encounter new gags. He styled himself “The Boy Comedian” and “The Bad Boy of Variety (or Vaudeville)”.

As it happens, one of his earliest traceable performances was at the Bristol Hippodrome, in the week of 4 December 1928. Even then, however, the Bristol press announced him as “the eminent Billy Lancet”, so he must have been around before that. Curiously he is also advertised for the same week at the Bath Palace, so it may have been that his popularity led him to revive the old music hall practice for an artist to play several theatres in the same evening, racing by taxi from one to the other.

With his restricted growth and un-breaking voice, he could have continued indefinitely, like his senior, Wee Georgie Wood (1894-1979), who had been performing since the first decade of the 20th century, and went on until 1953, and the later Jimmie Clitheroe (1921-1973) . Lancet evidently shared with them the unexplained glandular disorder that trapped them in permanent boyhood. However it is likely that ill-health abruptly, prematurely and finally ended his starring career in 1933. He was to appear on stage only once more, in February

1938, when he was at Wood Green Empire in the supporting cast of the veteran Charles Austin’s comedy sketch company.

He was briefly in the news again for a day in 1952, when he was hospitalized for the spectacular inconvenience of coughing non-stop for two weeks.

Not even pictures of Billy Lancet have turned up, except for a tiny newspaper print in a variety theatre advert. There is still a haunting vitality in the face.

Another smart critic of the time torments us with the great opportunity that was missed with Billy:

In the vaudeville houses, there is a delightful delineator of boy parts who is known by the name of Willie Lancet. He is immensely popular and even in these bad times manages to sneak bookings where bookings are said not to be. He reminds one of Georgie Wood as he was in his best days, but without the curls. Willy’s boy is your real little he-man, a rascal of rascals, a good boy gone delightfully wrong. Watching him a few nights ago in one of the fast vanishing variety houses I thought of an ingredient that some British film director might do worse than make use of, namely: one helping of Mrs Richmal Crompton’s William stories, a sprinkling of English countryside and a generous slice of Willie Lancet’s refreshing juvenile nonsense. Season with a selected cast, a smothering of crisp witty dialogue, and you have a dish the cinemas might be glad to add to their programmes”

SLAPSTICK would have been up for those!

***A post script on Wee Georgie Wood: I remember often seeing his act, which invariably began with Georgie striding onto the stage and catching sight of the microphone placed there. “Take that thing away!”, he would holler; “I was there before it was!”. And even in the biggest variety theatres he could make himself heard to the back the gallery. These eternal boys knew their job. ***And finally – Billy Lancet is known to have made another gramophone record, The Telegraph Boy. One to look out for!