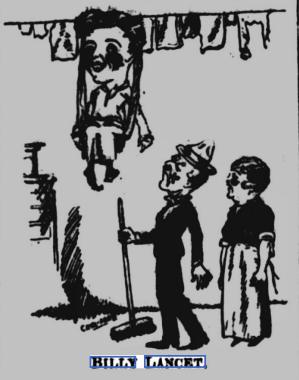 Since I reported the results of my researches into the brief career and subsequent total oblivion of the one-time superstar boy comedian Billy Lancet, I have been having second thoughts (and like them better).

The  theatrical journalists who wrote about Billy in his own time had been familiar for twenty years with the other “boy comedian”, Wee Georgie Wood.  They recognized Georgie as a victim of a thyroid disorder which condemned him (like the later Jimmie Clitheroe) to remain for life in a boy’s body, with a boy’s unbroken voice.  Sceptical critics of the time, consequently, questioned Billy’s advertised age and assumed him to be a fellow artist turning his glandular defect to artistic and financial advantage.  In my previous speculation, I went along with this notion – which left the mystery of why Billy’s career abruptly came to an end, while Georgie kept on for two more decades.  Now I would like to propose another possibility.

Could the claim that Billy debuted as a very accomplished comic at 9 years old actually be true?   Prodigies usually evince their gifts in their first ten years, and can come with multifarious talents – mathematical wizards, composers, dazzling instrumentalists, actors, poets (in 1955 we saw the publication of the 9-year-old French Minon Drouet’s inspired poetry).  So why not a 9-year-old genius with a talent for inventing non-stop comic monologue to torment the grown-ups around him.

If this explanation of the inspirational comic gift of Billy Lancet is correct, the story becomes less mysterious.  He made his triumphant debut in 1928, at 9.  His success was instant and phenomenal.  But in 1933, at 14, his voice broke….  THE END!