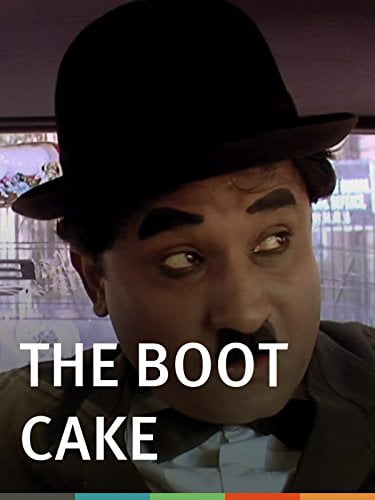 One of the tasks that I help with in the festival office is organising and cataloguing the festival’s very large film collection. Most of this involves just inputting the titles into a database, but occasionally, I do have to investigate the title a bit more. It’s always an interesting task, and I learn quite a bit while doing this. Today, I stumbled across a great documentary that I couldn’t help but watch!

The only information that I had was that the film was titled, The Boot Cake, and that it was a documentary. A quick search on IMDB brought up the film, and the following blurb caught my attention:

“Charlie Chaplin is a saint to earthquake survivors in a small desert town in India and they are throwing him a birthday party. Australian filmmaker Kathryn Millard is taking the cake – a chocolate truffle sponge shaped like the Tramp’s boot.”

Usually, I just watch a clip or two to see if a film is worth further attention. I decided to just give it a go and watch the entire film. I don’t think I stopped smiling through the entire film.

Adipur is a small town in northwest India. There is a group that was formed in this town called the Charlie Circle who revere Charlie Chaplin and his philosophy towards life. They want to do the same as Chaplin… make people smile and bring them joy through laughter. Yes, there is pain in life – but laughter helps us all move forward. Each year the group celebrate Chaplin’s birthday with a procession, cake and screening. The filmmaker was asked to bring a cake modelled after the boot that Chaplin famously eats in The Gold Rush. It’s great to see the whole town gather together to watch the film and celebrate Chaplin’s comedic creation.

Kathryn Millard mainly focuses on this town and its celebration, but she does briefly explore Chaplin’s influence in India and other cultures. I think someone could make a very interesting documentary exploring this subject. I would have liked to have seen a bit more how Chaplin’s films were screened in these other countries. As his films were silent, the visual comedy had a universal appeal and could be easily viewed and understood worldwide. We also get to see three Chaplin impersonators and they discuss why Chaplin had such an impact on their lives.

It is well worth seeking this documentary out. I always find it interesting to hear people speaking passionately about something they love. The film also gives us a chance to get a glimpse of just how far-reaching Chaplin’s fame was. There are also some great clips included of Chaplin copycats who made films during the 1920s to compete with his fame.

I’ve put a link to the trailer for the documentary below: