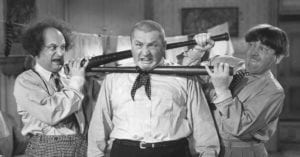 Why is Slapstick Violence Funny?

The subject of this post was originally going to be on an entirely different topic, which will be saved for a later time!

When I was doing research for that topic, I came across this TedxEmory talk on YouTube. The title of this video is, “Technology and the New Aesthetics of Violence.” I will warn you, there are some violent images shown from certain films in this video. So, viewer be warned! What does this video have to do with the Slapstick Festival? Well, there are a couple of reasons why I have decided to share this video.

The main reason why I even came across this video is that I was looking up the person presenting the lecture. Dr. Eddy Von Mueller is a lecturer at Emory University, and a former professor at Georgia State University in Atlanta, Georgia. More specifically, he was one of my professors while I was doing my film degree at GSU. Dr. Von Mueller had a dramatic impact on my education, and what areas of film history, theory, and criticism that I decided to focus on during my studies. In fact, you could say he was one of my favourite professors!

One of Dr. Von Mueller’s areas of expertise is in the study of animation. During the intro to this lecture, he explains that what he is attempting to explore is why violence in cinema can either make us laugh, cringe in fear or disgust, or make us cheer for a hero. Although most of the lecture is about gun violence is displayed in film, it can easily be transposed to other types of cinematic violence. It certainly makes a good starting point for how film studies explore how violence is portrayed in cinema and how different aesthetics can impact how an audience will react to that violence.

I’ve put a link to the video below… it’s a fascinating 20 minutes and takes me back to the film lectures that I absolutely loved!