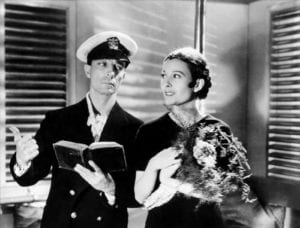 Spite Marriage is the tale of a tailor who is madly in love with an actress… so in love, that he’s gone to see her play countless times! He is given the chance to marry the woman of his dreams, but what he does not know, is that she is only marrying him to make her old flame jealous!

The film was made in 1929 and stars Buster Keaton, Dorothy Sebastian, and Edward Earle. Spite Marriage was directed by Edward Sedgewick and Buster Keaton. It was written by Lew Lipton, Ernest Pagano, Richard Schayer, and Robert E. Hopkins.

Dorothy Sebastian’s most famous films were in the late 1920s. She was contracted to MGM, and when her contract was over she was relegated to smaller parts. Her other well-known films include A Woman of Affairs (1928) and Our Dancing Daughters (1928). Sebastian and Keaton were romantically linked during the production of Spite Marriage. Edward Earle was a leading man during the early 1920s with roles in East Lynne (1921), False Fronts (1922), and A Dangerous Flirtation (1924).

Edward Sedgwick directed most of Keaton’s films during their time at MGM. They had a shared love of baseball and shared an office on MGM’s backlot. Sedgwick also directed Laurel and Hardy and is credited as discovering Lucille Ball.

This film has the distinction of being Buster Keaton’s last silent film. It is also the second film that he made for MGM after becoming a contract player. The previous film was The Cameraman, also directed by Edward Sedgwick. The Cameraman was a financial success for MGM. In addition to being his last silent, Spite Marriage was also the last film where Keaton was allowed any creative control. When MGM signed Buster Keaton, one of their concerns was over the budgets of his films. In crafting his films, Keaton often used a lengthy improvised approach. MGM wanted Keaton to stick to a shooting script.

Keaton’s original idea for the film was to make a sound comic western. Keaton realised that the success of The Jazz Singer in 1927 was a signal that the age of silent film was about to end. At the time, MGM only had one stage that was used for making sound films. Sound was being reserved for other types of films. It was felt by MGM that comedies that used physical humour where much better made as silent films. Buster Keaton wanted to use sound effects in his films, but keep the dialogue to a minimum.

One of the film’s funniest scenes involves Buster Keaton putting his drunk wife to bed. This scene was recreated with much lesser comedic effect by Gregory Peck and Audrey Hepburn in Roman Holiday (1953). Buster Keaton would go on to recreate the scene himself on stage in the 1950s with his wife, Eleanor Keaton.