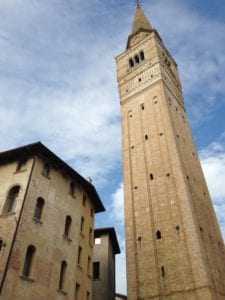 Sunday was our first full day at the festival. The great thing about the festival in Pordenone is that there is such a variety of screenings. If a screening isn’t to your taste, you can still have a full day of interesting viewing. A festival pass allows you to go along to any screening that you want… it was such a stress-free experience. As this was my first time at the festival, I was trying to fit in everything that I could! Screenings start at 9 am and run into the late evening.

Sunday morning began with a Norwegian film entitled Synnöve Solbakken (A Norwegian Lass). This was a film about a woman from a very religious family and her two would-be suitors. It features beautiful scenes of the Norwegian countryside. I found this film quite interesting as it the religious themes were quite heavily pronounced. Thorbjörn, one of the suitors, spends his youth constantly being tempted into trouble by one of the farmhands that works for his father. The farmhand is eventually sent away, but comes back to torment Thorbjörn later in the film. Because of this, Thorbjörn has a moment of redemption and forgiveness that is one of the highlights of the film. Piano accompaniment was provided by Donald Sosin.

This screening was quickly followed by the first of two events programmed around the idea of “Nasty Women.” This first event contained quite a few shorts about women subverting their role in a domestic environment… usually involving quite a bit of destruction! A few of the shorts in this screening were quite surreal. One short entitled Le Rêve des Marmitons was particularly strange. This short depicted some very lazy kitchen workers who are put into an enchanted sleep by a strange impish figure who then proceeds to lop off their hands! These hands are then put to work to complete the tasks of the workers. Such a weird film! I’ve included it below.

The afternoon screening that we attended was two Max Davidson shorts accompanied by two youth music ensembles. Previous Slapstick Festival guests might remember Pass the Gravy from a few years ago! Call of the Cuckoo featured quite a few famous faces including Laurel and Hardy. Don’t Tell Everything was a very funny short about a father who hides the fact that he has a son from his would-be rich girlfriend. The son dresses as a girl to pose as a maid, and a hilarious case of mixed up identity unfolds. I tried to find the film on YouTube, but haven’t been able to find it just yet. Instead, I’m putting Pass the Gravy below, because it is worth a revisit!

We ended the day with a documentary short and a Pola Negri film. The documentary featured the fishing techniques of the Kavirondo Tribe. The short featured some beautiful imagery of the tribes casting out their nets, but these were marred by the sensationalist language of the intertitles. Daan Van Den Hurk provided the dreamlike piano accompaniment for this short. The main film of the evening was Der Gelbe Schein (The Yellow Ticket) which featured the actress Pola Negri. This film told the story of a young woman who wants to study at a university in St. Petersburg. Because she is Jewish, her identity makes it difficult to attend this school. She poses as another woman to achieve her goals in education. The score for this film was quite unique to the other screenings we attended. It was mainly violin and piano, but also included singing and rhythmic vocalisations. The score was composed by Alicia Svigals, and was performed by Alicia Svigals and Marilyn Lerner.

One more post coming soon about our last day!