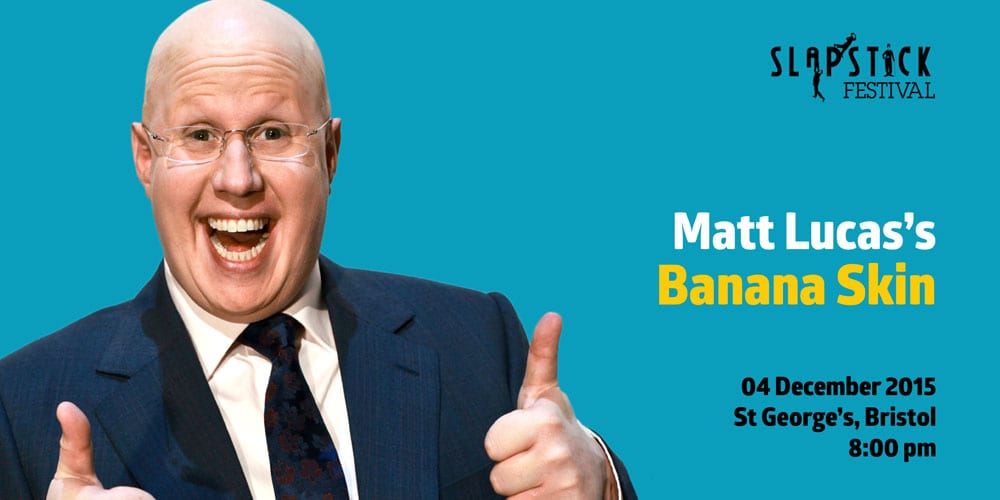 We’re thrilled to announce that one of  the UK’s best loved entertainers, Matt Lucas, is coming to Bristol for a special Slapstick Festival launch event this December to be held in the beautiful St Georges. Matt is famous for his own brand of slapstick comedy, and has starred in a range of comedies from Little Britain, to Shooting Stars, and has appeared in major film productions like Bridesmaids. His own work is known for its light hearted appeal and acerbic social observations.

A former student of Bristol University, Matt Lucas is not only renowned for such hugely successful shows as Shooting Stars, Come Fly with Me and Little Britain, but also for the recent BBC comedy series Pompidou, his homage to ‘silent’ and visual comedy which “aimed to reinvent silent comedy for the twenty-first century”.

Titled Matt Lucas’s Banana Skin On 4th December Matt will be offering an exclusive insight into where he takes inspiration for his own comedy. He’ll be discussing his own career path, with a special guest host, and revealing the work behind his latest release, Pompidou. There will be a Q&A live with the audience afterwards. Matt says “I’m delighted to be invited to open Bristol’s Slapstick Festival. Graeme Garden has been harassing me to come for years and this time I could make it!”

Festival Director Chris Daniels is especially happy to be welcoming Matt to Bristol to help launch the 2016 festival, commenting…
“Matt Lucas is a perfect match for Slapstick. Matt’s body of work is full of visual comedy and affectionate references to the silent era films and stars we also cherish, especially Chaplin, Keaton and Laurel and Hardy.”

Get tickets your tickets today from the St George Website

Bought your tickets already? Let us know and send us a tweet! @SlapstickFest