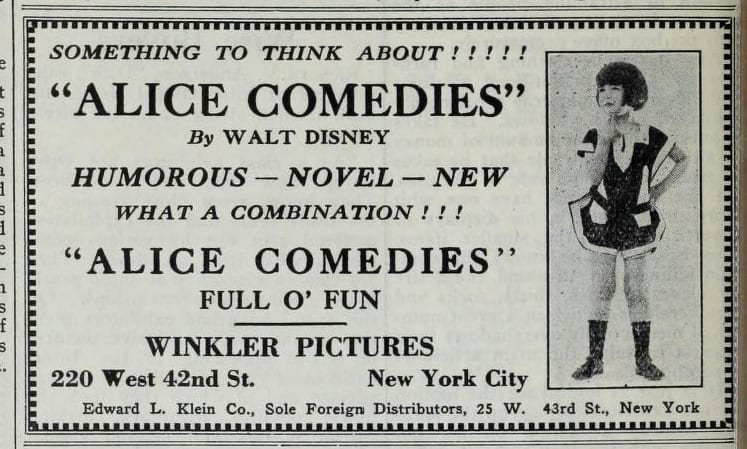 It all started with Alice…

One of the tasks that I’m doing for the festival now is organising its DVD library. It is very interesting going through all the titles… I enjoy coming across new and different films. One of the discs that I was reviewing contained two of Walt Disney’s very early animated shorts. I was already familiar with these shorts, but I thought I’d share a little bit of that information here.

In 1923, Disney developed a series of shorts that came to be collectively known as the Alice Comedies. Walt Disney directed all 57 of these shorts that were made between 1923 to 1927. They were loosely based on Alice in Wonderland and featured a live-action young girl who had various adventures in a cartoon world.

The first short, “Alice’s Wonderland,” was produced in Kansas City, Missouri at Laugh-O-Gram Films. This was Disney’s first studio which eventually ended up going bankrupt… but not before Disney moved to California and securing a deal to produce more of the shorts. Four young girls would portray Alice in these shorts. These shorts are now in the public domain.

I thought I’d research a bit more about the first Alice, Virginia Davis. She was in the first short made in Kansas City, and moved to California with her family to continue appearing in the series. Davis stopped appearing in the shorts after a negotiation in pay did not conclude in an increase. This was not the end of her relationship with Disney. She would eventually work for a short time in the ink and paint department of the Disney studios. She also provided uncredited voices in the classic animated film, Pinocchio. She spent her later career as an interior designer. In 1992, she was a special guest of the Le Giornate del Cinema Muto in Pordenone, Italy.

I’ve put a couple of the shorts below.

Information was found from Wikipedia and the LA Times.