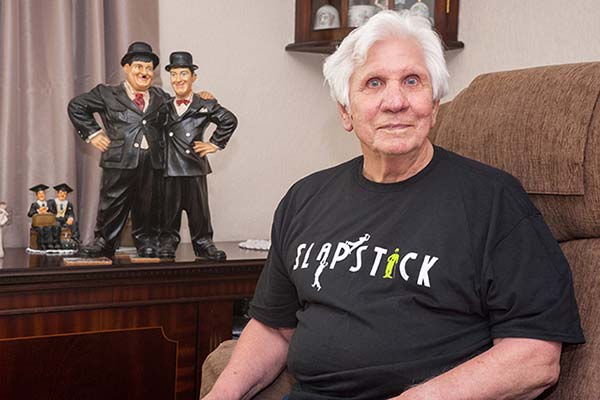 Tony has only missed the 10th anniversary celebratory show, when he unfortunately suffered heart failure. He said, “It was midday and I was breathless and dizzy. I was rushed to Southmead. I was really sad to miss it, but it was very much unavoidable. But I am lucky to be here.”

For 79 years, Tony White has been a dedicated fan of silent comedy. This veteran of all things comedy has battled several life-threatening illnesses; being left with paralysis after a stroke; battling cancer twice, and been in a coma for nearly a month! In spite of that, Tony has attended almost every event at a festival celebrating the golden age. Impressively, he’s only missed Slapstick Festival once in 12 years!

Tony takes his wife of 55 years, Sheleagh, and nowadays often attends with his Doctor too!

“I am lucky to be here. I may be unwell, but it’s not going to stop me living the good life. The Slapstick Festival has definitely brought more interest and joy into my life. I love going to the shows, and we even joke now that I have to bring my doctor in case I take a funny turn.

“I was brought up in the war years, when going to the theatre or cinema was a big source of entertainment. The Slapstick Festival, with its live orchestra, brings back the old memories. I love comedy and could even go to a funeral and laugh. There’s something about physical humour which really makes me giggle.”

Tony has only missed the 10th anniversary celebratory show, when he unfortunately suffered heart failure. He said, “It was midday and I was breathless and dizzy. I was rushed to Southmead. I was really sad to miss it, but it was very much unavoidable. But I am lucky to be here.”

We’ll let you off for that one, Tony.

His wife, Sheleagh, said: “I think the Slapstick Festival has given Tony a new lease of life. We both laugh out and have a great time. We believe in seizing each day with both hands.”

Slapstick Director Chris Daniel has been lucky enough to call Tony a friend for nearly 30 years. Chris had cared for Tony’s late son, Richard, who was blind and had learning disabilities after catching meningitis as a child. Sadly, Richard died aged 29, and Chris and Tony have remained close ever since. In fact, Tony encouraged Chris to set up the Slapstick Festival – and to this day Chris seeks his guidance.

“Chris has put Bristol on the comedy map.  I think it’s as important as the Balloon Festival. I’ve seen it grow over the years – from not being able to half fill the auditorium to sell out success. Chris is a lovely, caring man and has worked so hard make this an amazing event. I’ve met a lot of interesting people through him.”

The stars Tony has met…

Tony met Laurel and Hardy in the 1950s outside Bristol Hippodrome stage door, where they had performed.

“I was a school boy,” he said, “And I couldn’t afford to go to the show. I waited outside and got an autograph. I met Marlene Dietrich in the same way. She just said ‘hello darling’ to me. Little did I know at the time, but she was with Burt Bacharach, whom she had been touring with at the time.”

He also queued up all night to see Shirley Bassey – who could blame him! – and his photo even appeared on the front page of the Bristol Post at the time.

But perhaps his most memorable meeting was with Frank Sinatra in 1954, who let him try his hat on and bought him his first alcoholic drink. Not bad, eh?

“I went to see him perform at the Hippodrome when the tickets cost around five shillings, which was expensive at the time.  I had a cheap ticket, but as there was room at the front, Sinatra told me to move forward. He invited me back stage after the show and asked if I wanted a drink. I said a ‘Guinness please’. I shouldn’t have, because I was only 15. He then popped his hat on my head and said I’d been the only one who’d been allowed to try his hat on. He signed an autograph for me.”

His autograph, which had been placed in a box, has disintegrated over the course of time.

“It was a time before mobile phones and selfies. It’s a pity I didn’t get a photo with him, but I’ll always have the memories.”

Chris Daniels said: “Tony has been a great supporter of the festival – not only regularly attending and meeting the guests backstage, but in offering his experience and opinions for programming ideas too. The Gala wouldn’t be the same without him, Whenever I come to sit down in my seat with a sell- out crowd,  just as the show is about to start, I walk passed Tony in his regular seat in row O and I know ‘all is well’  and it’s going to be a good show. And it usually is.”

“Tony is a delight to know. He is perhaps Slapstick’s most passionate supporter, but most of all, a dearly loved friend.”

Our fundraiser event, Stand Up for Slapstick, will take place on Sunday, June 12. Click here for more information.