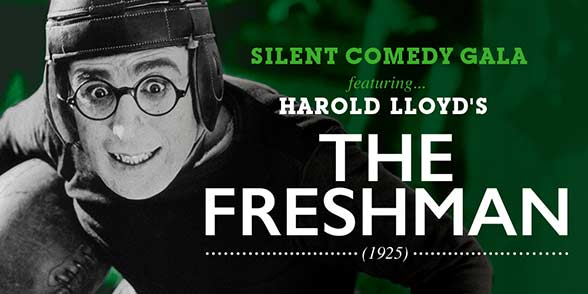 As usual, the national comedy treasures of our own time come together to pay tribute to the legendary comedians of the past.

Harold Lloyd, a superb athlete masquerading as a good-natured bespectacled idiot, created the “thrill” comedy; and his masterpiece The Freshman (1925) mined all the comic possibilities of the college campus generations before Animal House or Pitch Perfect.  Its massive box-office receipts helped Lloyd to outclass the commercial success even of Chaplin and Keaton  in the 1920s; and it was one of the first films  selected for permanent preservation in the United States National Film Registry

Now restored to its original visual brilliance, The Freshman will be accompanied by the famous score composed by Carl Davis, with the 25-piece Bristol Ensemble conducted by Guenter A Buchwald.

The programme also includes the incomparable Laurel & Hardy in one of their best silent comedy shorts with new live accompaniment. In The Finishing Touch (1928) they are employed as professional “house finishers”, and live up to the title – though not quite as their employer anticipates!

The indispensable Buster Keaton will be seen in his first independent short production The High Sign, in which he is inadvertently hired as hitman both by the murderous gang of the Blinking Buzzards and by the man he is to liquidate.  This small masterpiece will be accompanied by The European Silent Screen Virtuosi.

Make sure you don’t miss out!