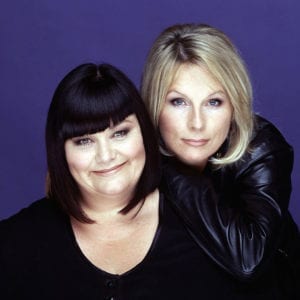 It’s here! It’s finally here! Tomorrow, Dawn French and Jennifer Saunders will receive the Aardman Slapstick Comedy Legend Award. It’s sure to be a fabulous evening packed full of laughter and surprises. French and Saunders will be joining an illustrious group which includes June Whitfield, Barry Humphries, Barry Cryer, and Ken Dodd. Mel Giedroyc (who also had an early appearance on French and Saunders with her comedy partner, Sue Perkins) will be hosting the evening and leading the conversation. The award is Morph designed to look like the recipients, I can’t wait to see what their Morphs look like!

As an American, I probably stumbled across French and Saunders in a more roundabout way. Comedy Central was still a smaller network in the 1990s and most of their programming consisted of syndicated programs. One of these programs was Absolutely Fabulous which was first broadcast in the US in 1994. This was a huge ratings success for Comedy Central, who made the great decision of airing it uncut and not worrying if certain British references did not translate. Off the success of the program, Comedy Central used to have a program block on Monday evenings called “London Calling.” Absolutely Fabulous was the cornerstone of the evening. French and Saunders was shown afterwards, and this was how I became acquainted with this terrific comedy team. Other programs shown in this comedy block included The Young Ones and Fawlty Towers.

I loved Ab Fab (surprisingly, so did my mother) and I loved the humour of these two women. My favourite French and Saunders sketches are the film parodies, especially their great send-up of Whatever Happened to Baby Jane? I wanted to see more from these two, and I actively sought out The Vicar of Dibley to see more of Dawn French. In the US, The Vicar of Dibley was broadcast on PBS (Public Broadcasting Service). This network was the home of other shows such as Keeping Up Appearances, Are You Being Served?, and ‘Allo, ‘Allo! PBS was a great source for exploring other British sitcoms and The Vicar of Dibley was one of their more successful broadcasts.

Ab Fab, French and Saunders, and The Vicar of Dibley were great introductions to British comedy… and other great British actors and comedians. It is only now after living in the UK and revisiting the shows do I realise the impact that these two women had on British comedy. In the US, I only had this little bubble of knowing who French and Saunders were. It is great being able to watch these shows again and appreciate all the humour and references that I was not able to understand before. It’s also a testament to the skill of these two women that their shows were universal enough that they were appreciated by wider audiences.

Tomorrow night will be a truly special event as we get to hear these two talented women discuss their careers and comedic influences. It’s sure to be an informative and entertaining evening. I can’t wait to laugh along with the sold-out crowd at Colston Hall tomorrow night!