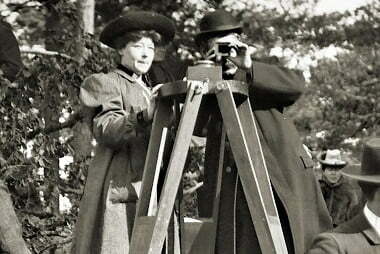 With Sian Norris and Lucy Porter

Lucy Porter and Sian Norris present a series of short films celebrating pioneering women in film comedy. Between 1914 and 1919, Universal Studios released 170 movies from women directors. By comparison, between 2007 – 2017, only 53 films directed by women were among the 1,223 which made it into each year’s chart of top 100 movies at the box office.

Featuring films from pioneering directors Alice Guy Blache, Mabel Normand, Lois Weber and more, Lucy and Sian discuss the films and the culture of the period and take a look at women in comedy today. With live piano accompaniment by John Sweeney.

Sian Norris is a writer and journalist. She is the Chief European and Social Affairs Reporter at Byline Times and her book, Birth Violence, will be published in 2022 by Verso. She is the founder of the Bristol Women’s Literature Festival. Lucy Porter is a stand-up comedian, writer and actor who can often be heard on Radio 4 on ‘Just a Minute’, ‘Quote…Unquote’ and ‘The Personality Test’.