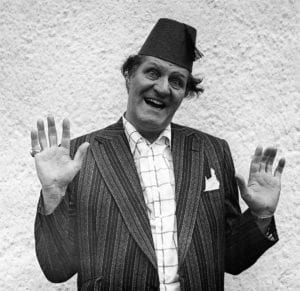 Things are in full swing in preparation for the festival in January! There are so many great events coming your way in 2017. One to look forward to is: Tommy Cooper – Just Like That. Barry Cryer (a regular festival guest), who was friends and wrote for Cooper, is hosting the event at the Bristol Old Vic.

The name Tommy Cooper conjures up a variety of images – the red fez, his loud guffaw, just the mere size of him, and his bumbling attempts at magic. He was staple of television entertainment in Great Britain for many years and achieved the status of national treasure. It seemed even the sight of him would delight audiences and start them laughing.

In reviewing Cooper’s shows and bits for the festival, it’s interesting to pick up on a couple of things. I love Cooper’s earnestness with his jokes. He loved telling them AND loved laughing at them along with the audience. He loved the laughter and the laughing. It pleased him so much to tell a good joke – always punctuated with that trademark laugh. Another part of his act that is truly enjoyable is his ineptness at magic. I’m a big fan of magic, and this is what I found most entertaining. What a great idea to play the foolish magician! Most of his tricks seemed to be of the magic shop variety. The sleight of hand was always just a bit too slow or something wasn’t always fully hidden from the audience’s view. Cooper knew this and played these bits for great comic effect. Occasionally…. and I mean occasionally… the tricks would land perfectly. And guess who would be just as astonished as the audience?

Most fans of Tommy Cooper will know how he discovered his trademark fez. What most people might not know was that Cooper was part of the prestigious Magic Circle. The Magic Circle is an international society for professional and amateur magicians based in London. I’ve read through the application process on their website. It is quite a lengthy and involved process and the Magic Circle does not take its membership lightly! Two magicians (and Magic Circle members) who have known you for over a year must recommend you. Afterwards, you must complete an interview and examination. Ultimately, your membership must be approved by the Magic Circle council. Oh, to be a fly on the wall for Cooper’s audition!

Display case at the V&A

I was in London recently, and I popped in to the V&A Museum. One of the recent displays in their Theatre and Performance Galleries is a case full of Tommy Cooper’s magic tricks, jokes, photos, and posters. One of the photos is of Cooper’s magic table, and details how his table should be laid out for his shows. It seems the clumsy Cooper left nothing to accident. The museum has an extensive collection of his notes and gags, which are being archived and will be available for reference. Here’s an interesting side note from one of the posters in the case: Festival guest Simon Callow once directed a show about the man entitled, Cooper! The show ran in the West End in 2003 with the title, Jus’ Like That.

Posters at the V&A

Barry Cryer will be sharing his stories about Tommy Cooper on Sunday the 22nd of January at the event, Tommy Cooper: Just Like That! Tickets are available here.