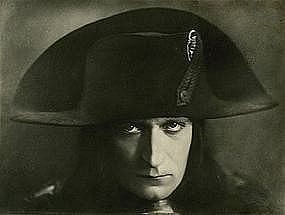 I spent Tuesday watching the epic of all epics – Napoleon.

Bristol cinemagoers have two days left to go experience this film at the Watershed. Go, go, go! Do not let the five and a half hour running time throw you off! (I’m sure you’ve binge-watched a series in a day… or watched all the original Star Wars trilogy in one go). The film is divided into four acts and there are plenty of breaks, including a longer one to get some much-needed sustenance. Film deserves to be seen on screen and with an audience, especially one that has gotten as much love in its restoration as this one has.

I’m not going to write too much about the film, because I want you all to see it. I remember reading about the film in my film history class at university. I never thought I would get a chance to see it on the big screen as it had been intended (Hint – now here’s your chance)! The visuals are stunning – the film communicates so much just through these images. I knew about the triptych finale in advance…. but nothing could have prepared me for how powerful it was. Colour tints are used in a beautiful fashion. I loved the yellows and the reds – they add so much to the film. The score by Carl Davis is also a highlight. It sets the tone for the visuals perfectly, and adds so much to that stirring finale. Check out the trailer below!

Napoleon might seem like an odd film for a post on this blog…. Well, there just happens to be a Slapstick Festival connection. Check out who led the restoration of this film, and you might recognise the name of a very special regular festival guest. Kevin Brownlow is an Academy Award-winning film historian, and has dedicated most of his life to restoring this film. It is a triumph! One of the aims of the festival is to get people not only interested in silent comedies, but silent films and film history in general. It is people like Kevin Brownlow who have taken the time to research and restore films that desperately need preserving.

There are two days left to see this film at the Watershed. If you have the time, don’t hesitate! This is something special… and it would be a shame not to appreciate it as it should be seen. Cinema preservation needs an audience, and it deserves one. These films are being preserved because they are works of art – much like a painting is best observed in person in a museum, a film deserves to be seen in the darkened auditorium of a cinema.

Abel Gance’s Napoleon can be seen at the Watershed until Friday – get tickets here.

Kevin Brownlow will be presenting the following events:

Silent Comedy: A Century Ago – A Fairbanks and Chaplin Double Bill – January 21 at 9:30 am