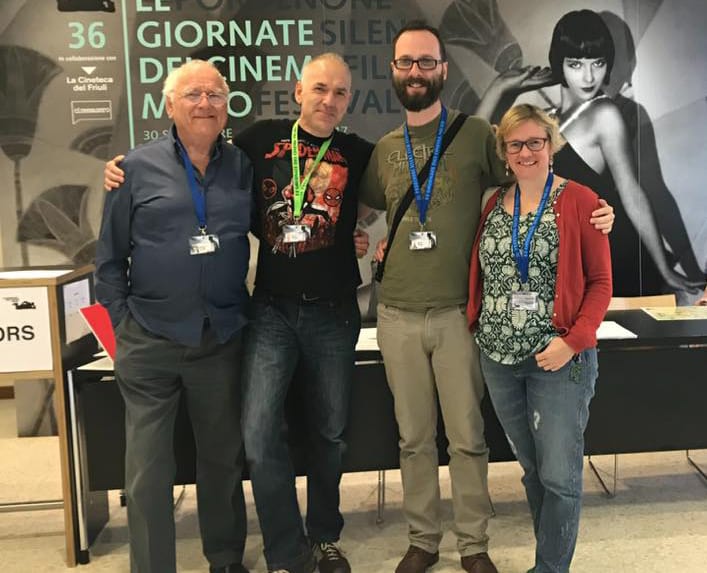 So, finally, I am writing about our last day at the festival! Sorry about the delay… but here it is! Monday the 2nd of October was our final day in Pordenone and I planned to make the most of it! I’ve decided that three days at the festival is not enough. Next year, I am planning to stay for the whole week.

Monday started with the second half of the “Nasty Women” shorts. I found this screening much more interesting as it primarily focused on two wonderful comedic creations, Leontine and Rosalie. Leontine is quite the mischief maker whose shorts often revolved around her using string to pull pranks on unsuspecting townsfolk. These shorts usually ended up with Leontine being chased by her very angry victims. Her partner in crime in a couple of these shorts was Rosalie, who also got to star in her own films. This was one of my favourite screenings, partly because it successfully portrayed the “Nasty Women” theme, but also because it introduced me to two very funny women that I might not have ever seen otherwise!

The next screening of the day included another Norwegian documentary short about Maasai men and women. This was followed by Fante-Anne (Gypsy Anne), a Norwegian film from 1920. The film tells the story of a woman who falls in love with someone from a higher class than her. Their love is forbidden by the man’s strict mother. In an act of revenge, Anne sets fire to their farm. A farmhand who has always been in love with Anne, takes the blame for the fire and is sent to prison. Once the farmhand is released the two travel to America to start a new life together. It had a bittersweet feeling as the two were going to America to be in a place free from judgement and prejudice. I promise I won’t get any more political than that!

The evening screening consisted of a recently rediscovered fragment of a Louise Brooks short entitled Now We’re in the Air. This short told the story of two wartime pilots who uncover an enemy spy hiding out as a hot air balloonist in a circus camp. Although it was a fragment, it contained enough of the narrative to engaging, funny and exciting! The next film in the screening was called The Reckless Age. This charming film was about a man who takes out an insurance policy to make sure that his marriage to a wealthy heiress takes place as planned. The insurance company sends an agent to ensure that this marriage happens. The agent unknowingly meets the bride and the two fall in love at first sight. There are mistaken identities, a con game, and ultimately a happy ending for all the principles. This was a very funny film, and well worth seeking out!

The late-night screening was a true highlight of the festival for me! Schatten is a German expressionist silent film. It was hauntingly accompanied by Daan van den Hurk and Franks Bockius. One of the interesting things about Schatten was that it contained no intertitles. Everything that happened on the screen unfolded with no explanation. The plot of the film consisted of a husband and wife who throw a dinner party. The three male guests at the party all make advances towards the wife. A puppeteer knocks at the door and offers his entertainment. His performance consists of shadow puppetry thrown on the walls of the house. These shadows are then used to show the partygoers what would happen if they lived out their desires. I really enjoyed this film as I had no idea about the direction the narrative was going to go. It also felt like I was watching something almost forbidden. There was nothing explicitly shown, but the film created an uneasy atmosphere of dangerous sexual tension.

I completely fell in love with my time in Pordenone and really look forward to a future visit to the festival. It was great to be exposed to such a wide variety of films and in such a beautiful and relaxed atmosphere. Being surrounded by fellow cinephiles also added to the experience, and it was great to see some familiar faces.