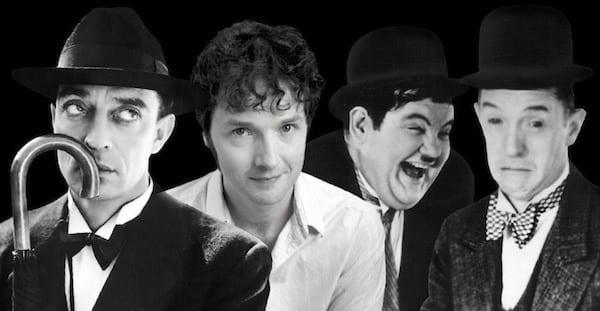 It brings us great pleasure to announce that Chris Addison, comedian, writer, actor and director, has accepted our invitation to become the host of the eleventh annual Slapstick Festival Gala to be held at Colston Hall on Fri 23rd Jan 2015.

Chris is probably best known as an award winning stand up, as well as for being a regular panellist on Mock the Week and for his acting in the BBC 2 satire The Thick of It. He’s also a regular on BBC Radio 4, both as a panellist on quiz shows and for a couple of adaptions of his live lecture-style comedy shows.

Chris has been a fan of our beloved silent comedians for many years now, as this quote from him explains:

“I spent every teatime when I was a kid rocking with laughter watching Stan & Ollie, Charlie Chaplin and Harold Lloyd fall off some things, get hit in the head by other things and accidentally attaching themselves to a couple more, so I’m delighted and excited to be coming to Bristol to take part in this wonderful celebration of the art of falling off, getting hit and accidentally attaching. I can’t wait to see the films as they were supposed to be shown – with an audience and live music.”

As we already mentioned in our previous e-mail will be introducing three stand-out films at the gala featuring some of the silent era’s best-loved comedians: Buster Keaton, Charlie Chaplin, Stan Laurel and Oliver Hardy.

In a bit of a coup for the festival it also gives us great pleasure to announce that none other than Rick Wakeman, the keyboard player and composer best known for his work with the progressive rock band Yes (but who’s also played with a whole host of other artists such as Black Sabbath, David Bowie, T. Rex, Elton John and Cat Stevens and the folk group Strawbs), will be joining us to make his debut as a silent film accompanist by improvising along to the Laurel and Hardy short Big Business on piano.

Rick, of course, is no stranger to comedy having contributed to the BBC comedy series Grumpy Old Men in the past.

About both these new additions to the festival’s gala our director Chris Daniels says:

“I’m thrilled that Chris will be hosting this gala event as he’s a huge silent comedy fan. He’s been wanting to get involved with us for a while but sadly dates with filming have always clashed – until now. Although he’s best known for his astute and witty dialogue – and for his stand up – he’salso passionate about visual comedy.”

“After 10 years it’s not easy to top the previous bills but I think we’ve done it – these three films are all bone fide classics of cinema and where else can people hear rock god Rick Wakeman accompanying a laurel and hardy film LIVE?”

“It’s a totally unique Bristol event, for one night only.”

We can’t wait to unveil more details about Slapstick 2015 for you and in our next email you can expect to hear more about some of the other events we have lined up at our other participating venues; The Old Vic, Arnolfini and Watershed. The overall program is very nearly locked in now and overall we feel it’s one of the strongest we’ve ever put together.

So watch this space for more details about Slapstick Festival 2015, or, if you wish to get the news as it happens, be sure to keep your eyes on our website, like us on Facebook or follow us on Twitter: @SlapstickFest(Hashtag #slapstick2015) And of course, if you like what you’ve read here please forward this to your friends.

Thank you for your time – we look forward to seeing you in January 2015!