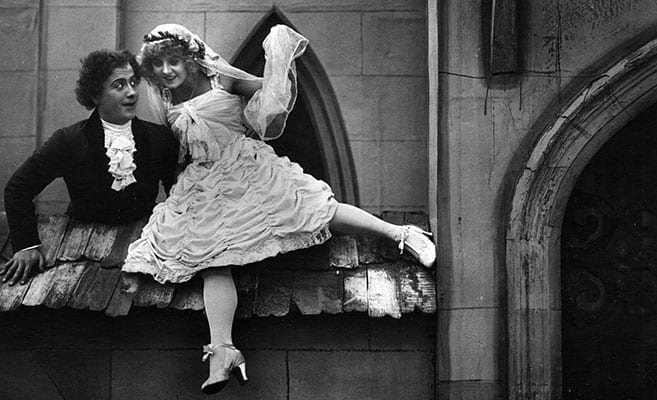 The neatest recent assessment of the films of Ernst Lubitsch is that of the Chicago critic Michael Wilminton: they are, he says, “at once elegant and ribald, sophisticated and earthy, urbane and bemused, frivolous yet profound. They were directed by a man who was amused by sex rather than frightened of it – and who taught a whole culture to be amused by it as well.”

But it is not just sex that amuses Lubitsch. He is delighted and entertained by humanity at large and cruelly perceptive of the vanity, folly, pretensions, fears and desires that lie beneath our defensive social appearances. Cruel, of course, only to be kind. This, after all, is the fundamental source of comedy – though “the Lubitsch touch”, as it was later to be defined, is apparent in all his work.

Given his comparatively short life (1892-1947) the range of Lubitsch’s achievement is remarkable. He was the son of an Ashkenazy Jew from Belarus, then in the Russian Empire, though he was born in Berlin where his father had set up as a tailor. The family business did not appeal and at 19 he joined the Max Reinhardt company as an actor (he appeared in London in Reinhardt’s spectacle The Miracle, and later in the film adaptation). His success in character roles led to leading roles in three film comedies (1914-1915) in which he played a Yiddish clerk in a firm who wins the boss’s daughter. By early 1915, starting with Blind Cow, he was directing the films in which he starred, and in the next two or three years a dozen films established him as Germany’s top comic star, particularly in his character of Meyer of Berlin. Unfortunately the war prevented his films being shown in Britain and the USA.

By the end of the war, starting with The Eyes of the Mummy 1918), he embarked on a series of spectacular period productions which were characteristically marked by Lubitsch’s appreciation of character: his films were undoubtedly influenced Alexander Korda’s later costume pictures. Carmen (1918) and Madame Dubarry (Passion, 1920) proved big successes in the United States, helping to reopen the American market to Germany after the war. They were followed by Sumurun, Anna Boleyn, The Loves of Pharaoh. At the same time Lubitsch continued his production of comedies, among them the enchanting though rarely seen DIE PUPPE (The Doll) which features in this year’s SLAPSTICK Festival. Based on one of E.T.A.eerie tales, it is the story of a young man too shy to have anything to do with women, who relents only when a doll-maker provides a mechanical doll as a bride. But when the doll is broken, the doll-maker’s provocative daughter takes her place … The story had already inspired the ballet Coppelia, two comic operas and a 1913 Gaumont film, but Lubitsch makes it his own, aided by the great performances of Ossie Oswalda is the “doll” and Hermann Thimig as the timid Lancelot.

Lubitsch recognised that Hollywood offered him much richer production facilities than he could hope for in Germany, and readily accepted Mary Pickford’s invitation to direct her in Rosita (1923). Though the film was successful, director and star chose not to work together again, and Lubitsch signed a generous contract with Warner Brothers. Here – undoubtedly influenced by Chaplin’s innovatory A Woman of Paris – he embarked on the social comedies which earned the style of “the Lubitsch touch”. The first and most famous of these, which also features in the 2015 edition of Slapstick, tells of the amorous intrigues of two married couples. Ostensibly it is set in Vienna, which probably reassured American viewers of the time, faced with an unfamiliar and comedic view of sex. As the American critic Theodore Huff wrote in 1947, “Lubitsch introduced or crystallised a new attitude towards sex. No longer was the instinct expressed as a mysterious force, a grand ecstatic passion, or an ennobling spiritual sentiment, but simply as a pleasant pastime”. Lubitsch’s comedies declined to take sex seriously; and as Lubitsch himself said, straight-faced, “I let the audience use their imagination. Can I help it if they misconstrue my suggestions?”

Though far from our notions of “slapstick”, Lubitsch’s comedy is supremely visual, relying on the wit of the camera movement and editing and the gestures, reactions, expressions of the actors (apparently minutely instructed by Lubitsch, the born actor, on how every scene and every gag should be played). Lubitsch relies little on intertitles: The Marriage Circle has only 54: the average silent film could have twice or three times that number. Lubitsch even achieved the phenomenon of turning Wilde’s Lady Windermere’s Fan into a silent film, while remaining totally faithful to the spirit of the original.

Lubitsch then was one of the greatest masters of silent film, yet the coming of sound was to present no problems for him. On the contrary he created his own distinctive style of musical with The Love Parade, Monte Carlo, the Smiling Lieutenant, One Hour With You; and went on to build witty comedies around the great 30s divas – Miriam Hopkins (Trouble in Paradise is reckoned by many as Lubitsch’s supreme masterpiece), Marlene Dietrich, Claudette Colbert, and , unforgettably, Garbo in Ninotchka. Although his last years were dogged by ill health and the responsibilities of work as a production supervisor, they nevertheless produced at least one comic monument, To Be or Not to Be, which, though it outraged much opinion in its time, turns the deadly weapons of comedy and satire upon the Nazi war machine.

But no chance to see a Lubitsch comedy should ever be missed.