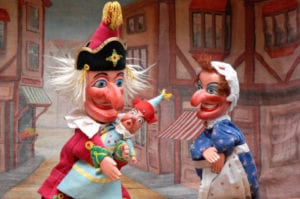 January is just around the corner! We are busy, busy, busy in Slapstick HQ getting everything prepped for the festival. One of the new additions to our programme this year is called Young Slapstick! The events are happening on Saturday the 27th and it is a great way to introduce the little ones to the joyful fun of slapstick comedy. The main event will consist of two shorts and some clips hosted by Mark Olver. Following that is a workshop in the physical art of slapstick – pratfalls and all – hosted by Circomedia. Later in the afternoon, there will be a Punch and Judy show. I thought I’d take this opportunity to write a little bit about Punch and Judy and their connection to slapstick comedy.

The term “slapstick” originated from an actual stick that was used as a sound effect in theatre performances. It was a club that was comprised of two slats of wood that when hit against something (or someone!) would create a very loud slap sound. It originated in Italy’s Commedia dell’arte and was later integrated into the Punch and Judy puppet show. Mr. Punch usually holds a slapstick during a performance. Punch and Judy shows are known for their exaggerated use of physical violence.

Punch and Judy shows also had their roots in Italy dating back to the 16th century and stem from the same Commedia dell’arte tradition. Marionettes were the first type of puppets used in the Punch and Judy show. Mr. Punch even has an official birthday in the UK – May 9th, 1662. This was the date that Samuel Pepys saw a show with the characters in a performance in Covent Garden. Punch and Judy shows were popular in other countries during the period. George Washington even went to see a show in the American colonies. The glove-puppet style that most modern shows use was gradually adopted in the 18th and 19th centuries.

Slapstick is welcoming Prof. Patel and his very unique Punch and Judy show in January. He is the first Asian Punch and Judy Professor in the UK. There will be two performances – one of a traditional Punch and Judy show, the other is Prof. Patel’s re-imagining of the characters with a bit of Bollywood panache. The show looks to be a lot of fun and I look forward to watching it myself!